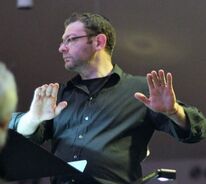 Cantor Pavel Roytman’s conducting and choral experience began when he was only six years old. It was then that he was hand-picked to join the all-boys choir at the Maurice Gliere School of Music for Talented Children in Kaliningrad, Russia.

Led by Estonian born conductor-composer Hugo Kruzmann, the choir represented the best of the choral tradition and culture of the former USSR. From an early age, Pavel was taught sight singing, solfeggio, music theory, and basics of choral conducting.

Pavel’s childhood experience later contributed to his decision to study choral conducting at Rachmaninov College of Music (1987-1991) and at Petrozavodsk State Glazunov Conservatoire (1991-1994).

In 1994 Pavel immigrated to the United States where he continued his musical education. He received a BM in vocal performance from DePaul University School of Music in 2000 and an MM in musicology from Northwestern University in 2002. In addition, Pavel received his investiture as cantor both from the American Conference of Cantors (Reform) and the Cantors Assembly (Conservative)

Throughout his studies, choral conducting remained an integral part of Pavel’s musical life. He served as a guest conductor for Campanella Children’s Choir and Second Baptist Church of Evanston Choir and as principal conductor for Milwaukee Jewish Community Chorale. He is currently the music director of Kol Zimrah Jewish Community Singers. Pavel’s conducting experience also includes church, synagogue, and community choirs as well as the leadership position at Zemer Am (2013-2015), a Chicago-based choral workshop.

In his current position as cantor for Beth Hillel Congregation B’nai Emunah in Wilmette, Illinois, Pavel conducts the adult volunteer choir, junior children’s choir, and the Chai Notes children’s ensemble. He writes music and is a published composer and performs worldwide as a singer and interpreter of Jewish liturgical and folk music.

Margo Schwartz-Newton is a freelance pianist and coach. After earning a degree in sociology, she pursued studies in piano performance at Roosevelt University and later earned a master's degree in collaborative piano from the Cleveland Institute of Music.

Margo has had the opportunity to use her skills in a variety of fields. In addition to collaborating with instrumentalists and singers, she has worked with several sacred and secular choirs and accompanied operas such as Menotti's The Medium, Purcell's Dido and Aeneas, and the world premiere of Wendell Logan's Doxology with the New Black Music Repertory Ensemble. Margo studied at the Aspen Music Festival and School, spent a summer at the Interlochen Center for the Arts accompanying ballet and modern dance classes, and participated in the UCLA Vocal Arts Institute and Summer Songfest. She has had the honor of taking master classes with Elly Ameling, Dalton Baldwin, Richard Boldrey, Warren Jones, Martin Katz, and members of the Cleveland Orchestra, among many others.

Formerly in arts administration, Margo is the pianist at Congregation BJBE and managing director at Darchei Noam Glenbrook as well as a Salesforce certified administrator in addition to her varied roles with Kol Zimrah. When she has free time, it is spent enjoying the company of her extraordinarily supportive husband, Joel, and playing with their ridiculously imaginative child, Oliver.